Oyo state government will continue to acknowledge and appreciate the support of individual and corporate organizations towards moving the state to an enviable position. 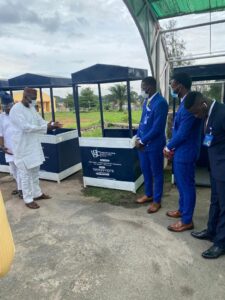 GOALPOACHER NEWS correspondent who was at the programme reports that the gesture by the company was facilitated by the office of the youth and sports led by Mr Kazeem Bolarinwa.

Since appointment of Kazeem Bolarinwa as Special Assistant to the Governor on Youth and Sports,his office has continued to reach out to young enterprenuers who had successful in their bussineses to contribute their quota to the development of Oyo state 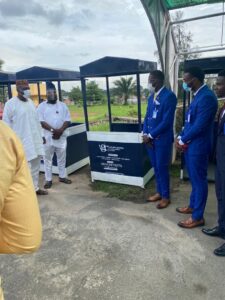 One of such group of young professional enterprenuers is Voltac Global Limited led by Dapo Abiola and Adewumi Theophilus as the company presented the ten Police traffic post.

In his remarks,the Chief of the Staff to the Oyo state Governor,Chief Bisi Ilaka said the state government under Governor Seyi Makinde will continue to appreciate the lofty contributions of well meaning Nigerians and group towards the development of the state.

“No materials is too big or small to support the state government in its effort to transform the state to enviable heights. Ilaka said.

The Chief of staff to the state Governor also lauded the contributions of Voltac Global Capital Limited and urged the young group of professional bodies to emulate the gesture. 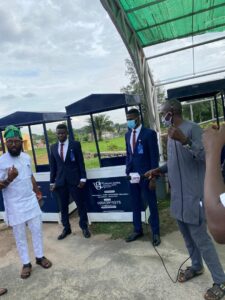 The Special Assistant to the Governor on youth and sports Mr Kazeem Bolarinwa said his office would continue to work closely with the group of young professional entrepreneurs especially youths for the advancement of the Pacessetter state.

Mr Kazeem stressed that the present administration under Governor Seyi Makinde is ready to support any initiative or ideas that will bring much needed development to Oyo state.

The Voltac Global Capital Limited led by Dapo Abiola and Adewumi Theophilus pledged the company’s more support towards the development of Oyo state.

The gesture according to them was part of their corporate social responsibility to the Oyo state government.

This is the third time within few months that the office of the special Assistant to the Governor on youth and sports would be bringing young professional entrepreneurs to contribute their quota to the progress and development of Oyo state.