Youths in Akinyele Laud Taoreed Jimoh on His Track Records, Rally Support For Him

Youths in Akinyele Laud Taoreed Jimoh on His Track Records, Rally Support For Him 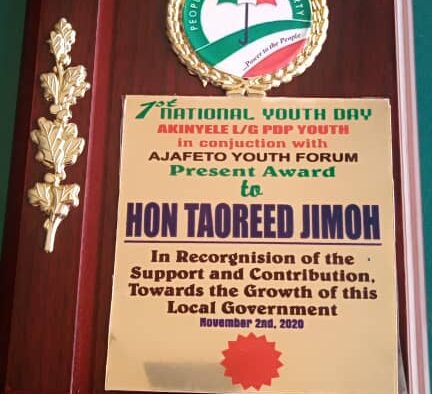 Youths in Akinyele on Monday awarded the caretaker Chairman of Akinyele Local Government, Taoreed Jimoh Adedigba for his selfless service to the people of Akinyele and his zero personal interest in the governance of the council.

The award, which was presented to the chairman at an event held at the Award Hall, Moniya, Ibadan.

According to Ajafeto Youth Forum which honoured Taoreed, the group said, “Leadership entails courage, commitment to the ideals of selfless service and unwavering dedication for the benefits of the people you lead and serve. Since your assumption of office as the caretaker chairman, you have consistently demonstrated these sterling qualities of leadership.

“Your style and substance are unmistakable and a welcome breath of fresh air to Akinyele’s sterile political space of self-aggrandisement. We are, indeed, very impressed by your resolve and determination to succeed in your mandate of delivering the dividends of democracy to the residents of Akinyele.

“Your boldness to state things in black and white no matter the circumstances, has endeared you to many. In short, you have become the voice of the voiceless as you have proven that Government is not for the fainthearted, neither is timidity or criminal silence a prerequisite for real term growth and development.

“In view of the impressive profile that our chairman has built in a relatively short time and which has gone a long way to restore hope, to the entire residents of Akinyele. We will support your aspiration to become the executive chairman of our Local Government.

On his part, Hon Taoreed Jimoh while addressing the youths commended Oyo State Governor Engr.Seyi Makinde for the opportunity given to him to represent the youths in his administration as caretaker chairman of Akinyele Local Government and implored the Oyo State youths and Akinyele to themselves involve in politics starting from registration as eligible voters, joining a formidable and reliable political party and give there support to the candidate of their interest during electioneering.

He also advised the youths to distance themselves from all forms of criminal acts.

He urged them to be ambassadors of peace in their various communities as only this will help their future ambition. The event was attended by the Senior Special Assistant to Governor Makinde on SDGs, Hon Kunle Yusuff MON and others.