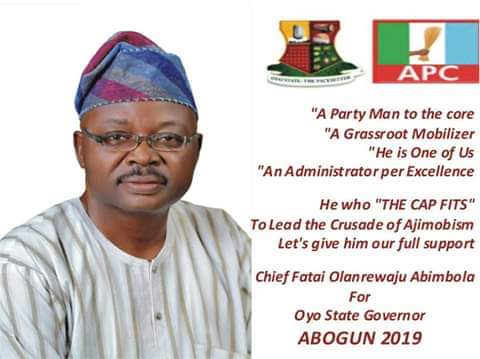 A former commissioner for Natural Resources who served in the cabinet of the immediate past administration of former governor Abiola Ajimobi, Hon Fatai Olanrewaju Abimbola popularly called Abogun was said to have died in a road crash on Friday, along Lagos-Ibadan Expressway

The sad incident was revealed to GOALPOACHER NEWS by one of the aides of the former governor who served as Special Assistant to the late Governor.

The source who initially refused to disclose the identity of the ex-commissioner as a result of not being sure if the family of the deceased commissioner had been informed about the sad incident as at the time of filing this report.

In another development, report reaching us has it that the deceased commissioner would be buried on Saturday at his residence in Idi Oya, Ayegun Oleyo, Ibadan.

The former commissioner also served as Special Adviser under Ajimobi, he was also a a Federal House of Representatives and at a time governorship  aspirant in the APC.