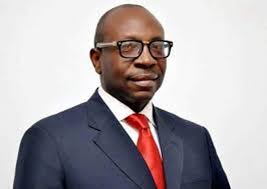 The flag-bearer of the All Progressives Congress, APC in the September, 2020 governorship election in Edo state, Pastor Osagie Ize-Iyamu has been asked to declare his COVID-19 status.

Edo First for Growth (EFG), a political pressure group led by Earl Osaro Onaiwu made this charge on Wednesday. The group said there are rumours making the rounds that the APC candidate might have contracted the dreaded coronavirus.
The EFG said the concern is currently gaining traction across the state especially as Ize-Iyamu failed to appear in Court on Monday for the continuation of hearing on his N700 million fraud case being prosecuted by the Economic and Financial Crimes Commission (EFCC). His lawyer had informed the Court that he was “indisposed”.
The group noted that judging from the travels that Mr. Ize-Iyamu had undertaken in the past weeks, it is plausible that he might have been exposed to the raging pandemic. This is especially as some of his high profile contacts during those shuttles have tested positive for COVID-19 and currently undergoing treatment.
EFG urged Pastor Ize-Iyamu to immediately go for COVID-19 testing and self-isolate for 14-days so that he does not compromise the health of those around him and ultimately, the Edo people at large at this critical time. The group further urged him to come clean with his condition and duly brief the public.