Makinde, Lanlehin in War of Words Over Ondo Election

Makinde, Lanlehin in War of Words Over Ondo Election 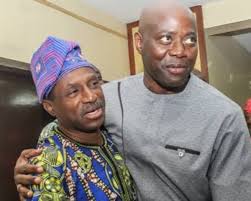 Following the declaration of the Ondo State governor, Arakunrin Oluwarotimi Akeredolu SAN, for a second term, Senator Olufemi Lanlehin (Solan), has felicitated him, on what he described as “a much deserved victory,” as well as cautioned the Oyo State governor, Engr. Seyi Makinde, against overrating himself.

Recall that Akeredolu, candidate of the ruling All Progressives Congress (APC), was declared winner in the governorship election conducted Saturday, 10 October, 2020, by the Chief Returning Officer, University of Ibadan’s Vice Chancellor, Prof. Abel Idowu Olayinka, having polled 292,830 votes, to defeat his main challengers, Eyitayo Jegede SAN, of the Peoples Democratic Party (PDP), who garnered 195,791 votes, as well as the Ondo State Deputy Governor, who was candidate of the Zenith Labour Party (ZLP), Agboola Ajayi, who polled 69,130 votes.

Lanlehin, who represented Oyo South Senatorial District between 2011 and 2015, and was the governorship candidate of the African Democratic Congress (ADC) in the 2019 polls, who praised Akeredolu, fondly called Aketi, for “gracefully enduring a torrid, hectic and charged campaign, like the gentleman and refined politician that he is,” had before the election, advised opposition parties in Ondo State against looking in the direction of the PDP, when it became evident the umbrella party badly needed a coalition, reminiscent of the Makinde example, to coast home to victory.

Senator Lanlehin (Solan), thereafter used the window of felicitation to expressly caution the Oyo State governor, Engr Seyi Makinde, against overrating himself, albeit politically. Makinde it is to be recalled, was Chairman of the PDP Governorship Campaign Council for Ondo State.

“Engr. Makinde’s larger than life disposition and deployment of enormous political arsenal in the just concluded Ondo poll is clearly uncalled for, and amounts to overstretching one’s luck, despite limited political experience, public service pedigree and personal integrity. I particularly urge him to take to heart the whipping lessons he received from his current Ondo misadventure and the last Kogi disaster, when he, on both occasions, returned to Ibadan with his tail between his legs, after failing in assignments that were very much beyond his capacity and experience,” Lanlehin stressed.

In a swift reaction, the Chief Press Secretary to the Governor of Oyo State, Engineer Seyi Makinde, Mr. Taiwo Adisa, has asked a chieftain of the All Progressives Congress (APC) and former Senator who represented Oyo South Senatorial District in the red chamber, Senator Olufemi Lanlehin, to stop the perpetual antics of dragging the governor into his political discourses, even when it was needless to do so.

The Media aide, in a response to a statement credited to the Lanlehin Media Bureau, declared that the Senator could easily make his point without struggling to drag Makinde into every matter.
He said that the measure amounts to attention-seeking and unnecessary plot to distract the governor from the course of rebuilding Oyo to the state of everyone’s dream.
The statement read: “Our attention has been drawn to the persistent struggle by the Lanlehin Media Bureau to draw the attention of the Governor of Oyo State, Engineer Seyi Makinde, each time the former Senator had course to make public statements.
“Much as one cannot deny the former Senator the right to interject in state and national political discourses, it has to be stated that he should be free to make his points without unnecessarily dragging Governor Makinde into his discourse.
“On the matter of the Ondo governorship election of October 10, it is on record that Governor Makinde, as Chairman of the Peoples Democratic Party’s (PDP) National Campaign Council did his best to secure victory for the party.
“Details of what transpired during that election are still being collated by the PDP, so we can say that the election process in Ondo is not closed. We can only advise the Senator and his newly adopted party to await the conclusion of the process in Ondo, which could get as far as the Supreme Court of the land.”
“However, it must be stated that the attacks launched by Senator Lanlehin, obviously playing to the gallery to gain relevance in his new party, are needless. It is clear to well-meaning members of the public that turning what should have been a congratulatory message to Governor Rotimi Akeredolu to an avenue to rubbish Makinde is undignifying and unbecoming of the Senator, who should have known and acted better.
“In any case, Governor Makinde remains unperturbed by the noise of the marketplace, as he continues to keep his focus on the goal of developing Oyo State, expanding its economy and lifting its people from poverty to prosperity,” the statement added.