Leaders of all Staff Unions at the Adeseun Ogundoyin Polytechnic, Eruwa have called on Oyp State Government to disregard some protest news making rounds about the appointment of Dr. Ogundiran Samuel Ogunwale as the Council Chairman of the institution, describing the authors as “enemies of progress”.

This was contained in a letter dated July 16, 2020, jointly signed by leaders of ASUP, NASU and SSANIP, of the institution addressed to the Honourable Commissioner for Education Science and Technology in the State stressing that the news was not only untrue but also misleading. 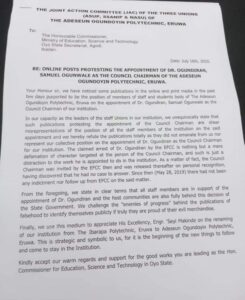 The letter which read that the purported position of members of staff and students body of the Adeseun Ogundoyin Polytechnic, Eruwa on the appointment of Dr. Ogundiran , Samuel OGUNWALE as the Council Chairman of our institution is false.

According to the letter duly signed by the executives of the unions, it was a deliberate attempt by mischievous people, planned to mislead His Excellency, Governor Seyi Makinde; the good people of Oyo State and the entire Publics of the institution. 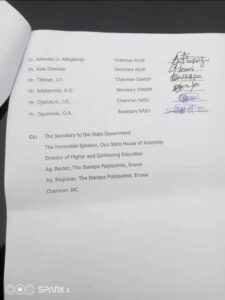 “In our capacity as the leader of the staff unions in our institution, we unequivocally state that such publication protesting the appointment of the Council Chairman are sheer mis representation of the position of all the staff members of the institution on the said appointment and we hereby refute the publications totally as they did not emanate from us nor represent our collective position on the appointment of Dr. Ogundiran as the Council Chairman for our institution”, it read.

The letter, signed by the Chairmen and Secretaries of each union said “the claimed arrest of Dr. Ogundiran by the EFCC is nothing but a mere defamation of character targeted as the person of the Council Chairman, and such is just a distraction to the work he is appointed to do in the institution”.

It further stated that though the Council Chairman was invited by the EFCC sometime around May, 2019, he was released thereafter on personal recognition, having discovered that he had no case to answer.

The leaders therefore called out the ‘enemies of progress’ behind the false publication to identify themselves publicly. “From the foregoing, we State in clear terms that all staff members are in support of the appointment of of Dr. Ogundiran and the host communities are also fully behind this decision of the State Government. We challenge the “enemies of progress” behind the publication of the falsehood to identify themselves publicly if truly they are proud of their evil merchandise”.